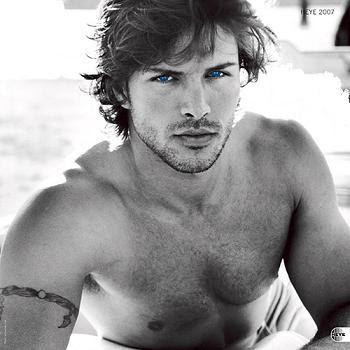 (Model Pic: no-idea-who-he-is-but-he’s-so-yummy-i-can’t-stand-it)
Birthday: September 5th, 1980
Age: 29 (22 mortal years, 6.5 vampire years)
Hair: Black, Shaggy
Eyes: Steel-Blue
Height: 6’ 3”
Dominic (preferably called Dom) was placed into the Illinois State foster care system as an infant. He knows nothing of his biological parents. The foster homes he was placed in were less than loving. He grew up with people who wanted the extra paycheck every month and gave two shits about his well-being.

In kindergarten he met a little girl, Angelica, whom he befriended (and also fell in love with) on the playground. He spent a lot of time at her house growing up and any knowledge he had of loving families was gained through observing her home life and being treated like the son her parents never had. Afraid of destroying their friendship, Dom never revealed his true feelings to Angelica. Instead, he learns to be content with what he can have with her.

At a young age Dom decided he wanted to be a police officer. As a result of his upbringing, it was his mission to put away all of the lowlifes who practice neglect and abuse. He worked hard in school and gained a scholarship to Northwestern University where he majored in Police Science with an unofficial minor in one-night stands. ;) Angelica also attended Northwestern for pre-med and they remained inseparable friends throughout their college careers.

While walking home one night Dom was kidnapped by Griffin, a member of the Diabolus Umbra (soulless vampires). He was turned that night, but managed to escape during his change. He was found by another vampire (not of the soulless variety), Damien, who became Dom’s mentor and teacher. Eventually Dom was invited to become a Hunter like Damien and now – over six years since being turned – he spends his nights hunting and killing the Umbra who terrorize the people of Chicago. When he’s not hunting, he hides in the shadows to keep a close watch on Angelica (who believes him to be dead) to make sure no harm ever comes to her, while secretly longing to be by her side…in more ways than one.

So, what do you think of our Hero?
8 comments:

Chapter One: And now for something completely different...

For those of you interested in the long and grueling writing process, you can compare my earlier "Final" draft of Chapter One to this version. Notice the differences in the "showing vs. telling" and what I chose to do to correct those problems. Instead of telling you what Dom looked like, I now show you through conversation with other characters, etc., etc. I'd love to hear your thoughts about the changes. I'm pretty proud of this version...but that's not to say that it's yet at it's best. (I hope to God it is soon, though!)


Dom Russo had the ability to drink any one of his college buddies under the table and still act sober as hell. A talent that came in handy when he didn’t want to make a drunken ass out of himself. Like now.

He was standing on the sidewalk outside the last Northwestern graduation party he planned to attend, if only to spare his liver from developing a severe case of cirrhosis. Although it was much quieter out here, the muffled sounds of bass pounding from the stereo and the drunken shouts from the Frat house were an incessant din invading his mind.

Standing in front of him was his lifelong friend and, unbeknownst to her, star of most of his late-night fantasies, Angelica Rose Hart. They had gone to school together their entire lives and he’d loved her from the very beginning.

As she chatted with a friend Dom drank his beer and watched the breeze finger through her long, silken blonde hair. Subconsciously she brushed aside her long bangs to keep them from hiding her eyes; eyes shaped like almonds and the deep color of the Caribbean waters. She laughed at something her friend said, drawing his gaze to the source of that infectious sound. Her full, glossy lips beckoned, begging to be kissed. He ached to answer their call. To meld them with his own and claim them as his.

The above “conversation” happened over a discussion thread in my recently-joined group, WPRW. I’ve only been a member for about a week and already I’ve learned so many things, including the definition – and value – of a CP.

Email ThisBlogThis!Share to TwitterShare to FacebookShare to Pinterest
Labels: Writing Advice from a Novice

Visit me over at Fang-tastic Books!!!


I'm discussing my fascination with the unique origins authors give their vampires. At the end I throw in a taste of the origins for my own vampires, which I believe to be pretty unique in itself. :)

I'd love for you to stop by the post and say "hi" and let me know what you think in the comments! I'm really excited about it (and kind of nervous, too!)

I'd like to thank Roxanne for the opportunity to reach out to all of her followers and share a little bit of myself.

Have a great rest of the weekend everyone. Stay wicked!  ;)

Email ThisBlogThis!Share to TwitterShare to FacebookShare to Pinterest
Labels: My Guest Spots, Promoting My Pals

Contest at All Things Smart and Scary...

Hello, my faithful followers! Happy Friday to you!

Today I want to let you know about a contest that my friend, Nicole Hadaway, is running over on her blog site, All Things Smart and Scary. She's giving away a copy of Dwayne Kavanagh's novel A Child's Wound, which is a suspense thriller about a serial killer! Here's a blurb about the book:

Email ThisBlogThis!Share to TwitterShare to FacebookShare to Pinterest
Labels: Promoting My Pals

Okay, so I'm not really writing the Neverending Story (I totally loved that movie as a kid. I still cry when Artec the horse sinks into the Swamp of Sadness!), however I AM starting to feel like I'm in a whirlpool of Neverending Editing.

During my short time as an amateur-writer-attempting-to-be-a-professional-author, I've visited so many great blogs and websites chock full of information on writing, publishing, etc. Most importantly I've met a few new writing friends along the way (Especially the lovely and extremely talented Ms. Nicole Hadaway. You can check out her awesome blog All Things Smart and Scary and also purchase a copy of her vampire-tastic book, Release, at ebookundead.com. But I digress.)

Through these new connections I have acquired lots of great advice and support. One of the things my good friend Nicole had made me aware of was my habit of "telling, not showing." With her help in pointing out a few examples in my work I was able to enhance certain aspects by using the ever important rule of "showing, not telling." However, it turns out I had only grasped a small portion of what she meant.

Email ThisBlogThis!Share to TwitterShare to FacebookShare to Pinterest
Labels: Promoting My Pals, Writing Advice from a Novice

Dom spotted Angelica, no longer in her pink sundress, but in her usual sleepwear: A tank top and lounge pants. Both light pink, of course. How she managed to make casual loungewear look so damn sexy was beyond him.

She paced back and forth in her bedroom, clearly very agitated. Although his vision wasn’t completely in-focus and his hearing was garbled, there was no mistaking her anxiety.

Concerned, he struggled to focus his senses. It took a tremendous effort, but eventually he succeeded.

“You’re not listening to me. He swore! Dominic has never broken his word before. He should’ve called hours ago and he’s not answering his phone or his cell. Something’s not right, I can feel it.”

This is as far as I'm taking this chapter on my own. There may be additional changes in the future from professional editors, but I'm (pretty) sure this is MY finished product. I hope you like it.

Dom Russo had the ability to drink any one of his college buddies under the table and still act sober as hell. A talent that came in handy when he didn’t want to make a drunken ass out of himself. Like now.

He was standing on the sidewalk outside the last Northwestern graduation party he planned to attend, if only to spare his liver from developing a severe case of cirrhosis. Although it was much quieter out here, the muffled sounds of bass pounding from the stereo and the drunken shouts from inside the Frat house were an incessant din invading his mind.

Standing in front of him was his lifelong friend and, unbeknownst to her, the star of most of his late-night fantasies, Angelica Rose Hart. They had gone to school together their entire lives and he had loved her from the very beginning.