Authors Gone Wild! (wherein they act like boobs instead of flashing them) 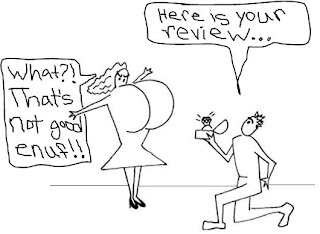 By now I'm sure most of you have seen at least a few examples of Authors Behaving Badly in regards to reviews they've found to be less than favorable. No? Well, here's the worst example I've seen. And if that isn't enough for you, simply Google "authors behaving badly" and you can spend days getting lost in the muckety-muck.

I haven't gotten too wrapped up in this whole blowup, but it seems like it's turned into an Interwebz Civil War...only without any civility whatsoever. Authors and Reviewers are choosing sides, sometimes pitting friend against friend, as everyone weighs in--rather heavily--on the subject of authors and reviewers mixing it up.

Everyone has the right to speak their piece. That's a given. In an ideal world, people would take others' feelings into consideration and refrain from being total jagdishes. Unfortunately, our precious world is far from ideal and there are a lot of assholes out there who couldn't give a damn about anyone's feelings. Such is life.

My author friend, Jessa Slade, wrote a post about this whole debacle and used a great analogy, comparing authors and reviewers to unwed parents. I like that analogy, especially since authors are wont to view their stories as their "precious babies."

So, following that line of thinking, I believe the parents in Jessa's analogy should stay far away from one another. You know, all that "and never the twain shall meet" kind of thing. Authors should view it as having a restraining order against them once someone has reviewed their book. At most, a polite nod from across the street to acknowledge the reviewer's presence would be appropriate. And that's even if the review is wonderful! Just like you don't want to hurt your image by bashing the reviewer if they found your book to be less than cookie-dough-wonderful, I think it would seem just as unprofessional to publicly gush your appreciation for a glowing review.

This recent 'splosion of shite is a perfect example of a few bad apples spoiling the whole bunch (here's a Goodreads shelf listing a whole bushel of those bad apples). But with the internet's permanency and lightning-quick ability to make anything viral in a matter of minutes, the spoilage spreads faster and farther than ever before.

The best we can do as authors is write a book to the best of our ability. But once we hand it off to the masses, we can't control how they'll receive it. Hopefully they'll love it, but not everyone will. It's an absolute and unequivocal certainty.

Authors, do yourself a favor, and stop the review-stalking madness. If you must say anything at all, please leave it at, "Thank you for your time," and then go write another book.