Interview with a Hot Biker 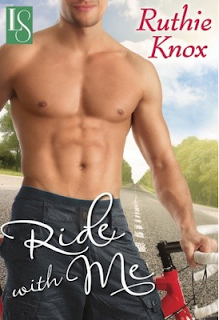 I am so excited to share my interview with the smokin' hot bicyclist extraordinaire, Tom Geiger. Tom is the hero in Ride with Me, an original romance by the incomparable Ruthie Knox, about a cross-country bike adventure that takes a detour into unexplored passion. As readers will discover, Ride with Me is NOT about the bike!

I hope you enjoy this sneak peek at Tom's amazing abs personality.

**Make sure you read all the way to the end to find out how you can win your very own copy of Ride with Me.**

GLM:  Tom, thank you so much for taking the time to join us here at Passions on Paper. I know you're busy with your new bike tour business up in Oregon, and I'm sure things are crazier than usual with all the publicity your story is getting due to Ruthie's book coming out next month.

TG:     Thanks, Gina. Yeah, it's been intense. I never really expected the book to be that, ah, lewd. Probably wouldn't have agreed to it if Ruthie had told me what she had in mind. I figured she was just doing a piece for some bike magazine.

GLM:  Believe me, we're all extremely glad for your ignorance. RIDE WITH ME is as hot as they come! I should know. I've read it several times already, and I'm sure those won't be the last. There's just something about all that hot tent sex...[fans face & clears throat] But I'm getting ahead of myself. In the beginning, your relationship with Lexie didn't start out with much heat, did it?

TG:      No, and that was my fault. I was pretty much a dick to her. She didn't talk to me for three days. [Tom smiles.] Stubborn woman. She came around, though. I just had to apply some heat.

GLM:  Speaking of heat, my favorite scene in the whole book is the hot sauce contest, which Lexie instigates in an attempt to win the days-long silent treatment war. What was going through your head when you figured out what she was doing?

TG:      At first I was just shocked. I'd been riding with the woman for three days, and this was the first sign I'd seen that she had a humorous bone in her body.

After that . . . well, she was something to watch. I've never seen anybody so completely determined to win. I got a huge kick out of watching her struggle not to show how bad some of those hot sauces were killing her. And I guess that was the first time I realized, "Christ, if that woman weren't already somebody's wife, she could cause you some serious trouble." [Tom chuckles and rubs the back of his hand over his mouth.]

GLM:  [mutters under breath...] I'd sure like to cause you some serious trouble...

GLM:  Hm? Oh, um, I was saying that you mentioned Lexie being someone's wife, but she was never actually married, was she? Tell us why you thought otherwise and how that affected you as the days went on in the tour.

TG:     She told me she was married. That was my fault, too, actually. [Tom shakes his head] Man, I really got off on the wrong foot with her that first morning in Seaside. I'm not even going to tell you what I said. It was that bad. Let's just agree that the lie had good justification -- for the first thousand miles or so.

How did it affect me? I'd love to tell you I kept my distance and kept my hands off her. I sure as hell tried. For the most part, I succeeded, but after a while I just had to get away from the woman. I found her somebody else to ride with and took off like a shot.

GLM:  Don't feel too bad, Tom. You ended up making things right, and your morals are one of the things that make you so attractive. You know, morals and...[rakes gaze over mega-hot body clad in cargo shorts and faded black Nirvana t-shirt]...other stuff.

Okay, so let's get to know a little more about you. How do you unwind after a hard day on the trails?

TG:      The usual stuff. You know, get cleaned up, drink a beer, read a book. Tinker with the bikes, if they need cleaning or adjusting. When Lexie and I are touring, one of us has to set up the tents and cook dinner, and there's laundry to do, so there's not a ton of down time. But what we've got, we just spend hanging out. Talking, looking at the stars. Sometimes we go to bed a little early. [Tom winks.]

GLM:  Ohdearlord. [blushes at Tom's throaty chuckle] Uh, where was I...[looks at notes] Ah, okay. Tell us where your dream place to tour with Lexie would be and one thing you'd love to experience while there.

TG:     Oh, man. Good question. There's so many good places. I think Mongolia would be cool. I read this article once by a woman who flew to Siberia with her bike and rode all the way through Mongolia, China, and Vietnam. Mongolia sounds amazing -- lots of wide-open space, riding through open country. No roads, even, so we're talking really remote. And in the book, this woman stayed with a different Mongolian family in their yurt every night. It's a hospitality culture, you know? So the Mongolian people considered it an honor, and they'd roll out the red carpet and share what they had. I think something like that would be incredible, just getting that deep into a culture that was so different from ours.

Come to think of it, Lexie will probably nip that fantasy right in the bud. Let's say Italy instead. I bet I could talk her into Italy, easy. Tuscany in the summertime would be pretty incredible.

GLM:  As interesting as a trip through Mongolia sounds, I'd have to side with Lexie on your idea of biking through Tuscany in the summertime. And if that trip should ever come to pass, I sincerely hope you'll let Ruthie write about your adventures. She's certainly done your first saga justice, as the rest of the world will soon find out! I have no doubt your little start-up operation in Oregon will gain a surge in customers after the release of Ride With Me. I hope Lexie's prepared for her man to have drooling, spandex-clad groupies biking after him.

Tom, it's been an absolute pleasure meeting you. Thank you so much for stopping by. Lexie is one lucky lady.

Isn’t he just totally scrumptious?! *sigh* Yeah, I know. Believe me, I’ve had the pleasure of reading Ride with Me and it’s a MUST READ, people! If that interview with Tom wasn’t enough for you, here’s the back cover blurb:

When Lexie Marshall places an ad for a cycling companion, she hopes to find someone friendly and fun to cross the TransAmerica Trail with. Instead, she gets Tom Geiger — a lean, sexy loner whose bad attitude threatens to spoil the adventure she’s spent years planning.


Roped into the cycling equivalent of a blind date by his sister, Tom doesn’t want to ride with a chatty, go-by-the-map kind of woman, and he certainly doesn’t want to want her. Too bad the sight of Lexie with a bike between her thighs really turns his crank.


Even Tom’s stubborn determination to keep Lexie at a distance can’t stop a kiss from leading to endless nights of hotter-than-hot sex. But when the wild ride ends, where will they go next?

Don’t miss this debut novel, folks! I guarantee you’ll join me on Team Ruthie as we follow her sure-to-be prolific career in the romance genre. So do yourselves a favor and CLICK HERE to pre-order your copy for its February 13th release!

And now for the GIVEAWAY!  One lucky commenter will be randomly chosen to win a digital copy of Ride with Me. Winners will pick up their copy through Net Galley. All you have to do is answer this question:

If you could tour anywhere on bike, where it would it be and why? 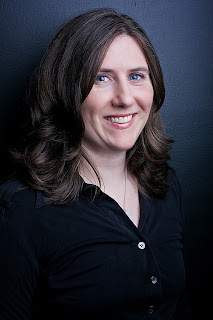 Ruthie Knox figured out how to walk and read at the same time in the second grade, and she hasn’t looked up since. She spent her formative years hiding romance novels in her bedroom closet to avoid the merciless teasing of her brothers and imagining scenarios in which someone who looked remarkably like Daniel Day Lewis recognized her well-hidden sex appeal and rescued her from middle-class Midwestern obscurity. After graduating from Grinnell College with an English and history double major, she earned a Ph.D. in modern British history that she’s put to remarkably little use.

These days, she writes contemporary romance in which witty, down-to- earth characters find each other irresistible in their pajamas, though she freely admits this has yet to happen to her. Perhaps she needs more exciting pajamas. Ruthie abhors an epilogue and insists a decent romance requires at least three good sex scenes.